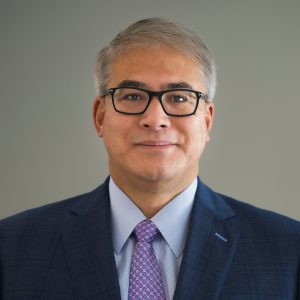 Peter K. Kaiser, M.D. is the Chaney Family Endowed Chair for Ophthalmology Research and a Professor of Ophthalmology at the Cleveland Clinic Lerner College of Medicine. As an NIH grant funded investigator, Dr. Kaiser leads a team involved in the evaluation of vascular biology in AMD and diabetic retinopathy, and is actively involved in numerous clinical trials. He is Editor-in-Chief of Retinal Physician, Associate Editor of International Ophthalmology Clinics, and serves on the editorial boards of several other publications. Dr. Kaiser received his medical degree from Harvard Medical School, completed his internal medicine internship at Massachusetts General Hospital, an ophthalmology residency at the Massachusetts Eye and Ear Infirmary, and a vitreoretinal fellowship at Bascom Palmer Eye Institute. For more information on Dr. Kaiser, please click here. 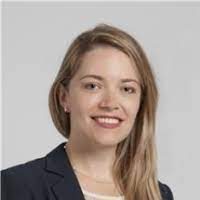 Aleksandra V. Rachitskaya is an Assistant Professor in the Department of Ophthalmology at Case Western Reserve University’s Cleveland Clinic Lerner College of Medicine and a member of the vitreoretinal faculty at Cleveland Clinic’s Cole Eye Institute. She specializes in the diagnosis and management of medical and surgical retinal diseases. Prior to her appointment at the Cleveland Clinic in 2014, Dr. Rachitskaya served on faculty of the Bascom Palmer Eye Institute in Miami, Florida, as the Chief Resident and Director of Ocular Trauma. An active researcher, Dr. Rachitskaya is involved in numerous clinical trials, including studies on diabetic retinopathy and age-related macular degeneration. In June of 2015, Dr. Rachitskaya and her colleagues at the Cole Eye Institute completed the first successful Argus II implant in the state of Ohio. Dr. Rachitskaya regularly publishes on her research and she has given numerous national and international presentations on her work. She is an active member of American Academy of Ophthalmology, the Association for Research in Vision and Ophthalmology, the American Society of Retina Specialists, the Retina Society, and the VBS Society. She is a recipient of the American Academy of Ophthalmology Achievement Award and the American Society of Retina Specialists Senior Honor Award. Dr. Rachitskaya completed an internship in internal medicine at the George Washington University in Washington, D.C., and earned her medical degree at the Case Western Reserve University School of Medicine in Cleveland, Ohio. During medical school, she spent a year at the National Eye Institute as a National Institutes of Health-Howard Hughes Institute Research Fellow and earned an induction into the Alpha Omega Alpha Honor Society. In 2016 Dr. Rachitskaya was the recipient of the prestigious Case Western Reserve University Young Alumni Award. 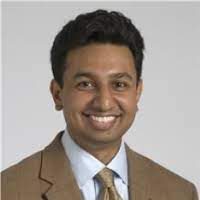 Dr. Sunil Srivastava is a uveitis and vireo-retinal specialist at the Cole Eye Institute at the Cleveland Clinic.  He is the current fellowship director of the vitreo-retinal fellowships.  He graduated summa cum laude both from Cornell University undergraduate and from SUNY at Buffalo Medical School.  He completed his ophthalmology residency at Emory University where he served as chief resident. He pursued and completed two fellowships, one a uveitis/medical retina fellowship at the NEI/NIH and a vitreo-retinal surgical fellowship at Duke University.  He previously was on faculty at Emory University prior to joining the Cole Eye Institute in 2010.  He has been awarded multiple teaching awards both at Emory and at Cole Eye.  He is both a Senior Achievement Award recipient from the American Academy of Ophthalmology and a Senior Honor Award from American Society of Retinal Specialists.  He has received multiple Cleveland Clinic Innovations Awards for his work in novel imaging analysis.  He has co-authored over 140 publications in peer-reviewed journals and has delivered over 200 lectures at national and international conferences.  His current interest include the use of novel imaging in uveitis and retinal diseases,  the development imaging outcome measures in uveitis and intraoperative imaging in vireo-retinal surgery. 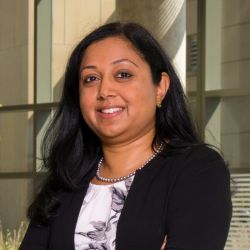 Dr. Domalpally is the Research Director of the Wisconsin Reading Center, one of the world’s leading diagnostic imaging centers for both patient diagnosis and clinical trials. Her work investigates clinical trial imaging endpoints for retinal diseases, with a focus on employing new imaging techniques to understand the natural history and prognostic markers of diseases such as age-related macular degeneration (AMD), diabetic retinopathy, and many others. In collaboration with National Eye Institute and other researchers around the nation, Dr. Domalpally led the imaging endpoints for the Age-Related Eye Disease Study 2(AREDS2), an influential study investigating the role of supplements in AREDS formulation for age-related macular degeneration (AMD) treatment. She has published over 25 papers for this study alone.
Lutein + zeaxanthin and omega-3 fatty acids for age-related macular degeneration: the Age-Related Eye Disease Study 2 (AREDS2) randomized clinical trial

Dr. Domalpally has a strong focus on improving the interpretation of the abundant and complex imaging data in clinical trials. A better understanding of potential errors in imaging technologies, for instance, reduces false interpretation of data and improves patient management. Dr. Domalpally has detailed artifacts that are intrinsic to OCT angiography technology that help clinicians quickly flag unreliable images that should be discarded.
Prevalence and severity of artifacts in optical coherence tomographic angiograms

She is also involved in developing diagnostic artificial intelligence (AI) algorithms for retinal diseases. In collaboration with the National Eye Institute, she has developed a deep learning algorithm that assists in detecting reticular pseudodrusen, a feature associated with AMD that is difficult to identify by a human observer.
Deep learning automated detection of reticular pseudodrusen from fundus autofluorescence images or color fundus photographs in AREDS2 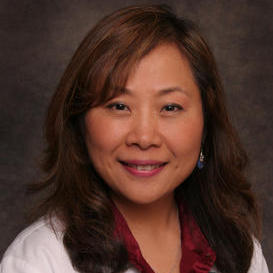 Dr. Judy Kim was inducted into the American Ophthalmological Society (AOS) during the society’s 150th (2014) annual meeting in New York. The AOS is limited to 275 active members and has included most of the notable luminaries in ophthalmology over the years. Dr. Kim is the first Korean-American ophthalmologist to become an AOS member. Founded in 1864, during the Civil War, the AOS was the first specialty society in the country, and its membership has served to influence virtually every facet of American ophthalmology. Admission to membership starts with a nomination process based on leadership and research in ophthalmology and requires the writing and publication of a thesis within three years of nomination. Acceptance into the society continues to represent special recognition of personal achievement. 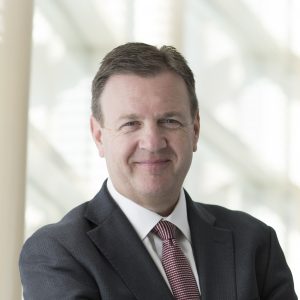 Daniel F. Martin, MD is Chair of the Cleveland Clinic Cole Eye Institute, the Barbara and A. Malachi Mixon III Institute Chair in Ophthalmology, and Professor of Ophthalmology in the Cleveland Clinic Lerner College of Medicine of Case Western Reserve University.  Dr. Martin completed medical school at The Johns Hopkins University School of Medicine followed by residency and chief residency in ophthalmology at Emory University School of Medicine.  He completed a fellowship in Vitreoretinal Surgery and Diseases at Duke University Eye Center followed by a fellowship in Uveitis and Ocular Immunology at the National Eye Institute of the National Institutes of Health.

Dr. Martin currently serves as the Network Chair for the DRCR Retina Network.  Dr Martin previously served as the Study Chair for the Comparison of AMD Treatments Trials (CATT) and has served as Study Chair for many other national clinical trials including those that led to FDA approval of the ganciclovir implant and valganciclovir.  He has served as PI, member of the DSMC, and/or member of the Steering Committee for dozens of other studies including AREDS, SOCA, and MUST.  He has published more than 200 peer-reviewed articles, delivered 38 named lectures, and delivered more than 400 invited lectures.  Dr. Martin has been the recipient of numerous awards including the 74th Edward Jackson Memorial Lecture, the Heed-Gutman Award, the AAO Lifetime Achievement Award, the J. Donald M. Gass Medal (Macula Society), the Roger Johnson Award in AMD Research, the Pyron Award, the Crystal Apple Award, the Rosenthal Award, the Sam and Maria Miller Award for Scientific Achievement in Clinical Research, the J. Donald M. Gass Award (Retina Society) and the Cless Medal. Dr Martin has previously served on the Board of Governors for the Cleveland Clinic. 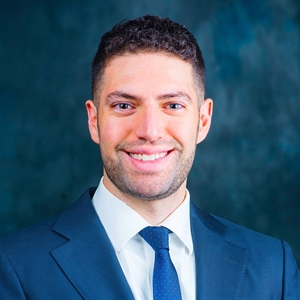 Dr. Danny A. Mammo is an ophthalmologist in Cleveland, Ohio. He received his medical degree from Oakland University William Beaumont School of Medicine and has been in practice between 6-10 years.

Dr. Yasha Modi specializes in Ophthalmology, with a special focus on Retinal Disorders, Diabetic Eye Disease/Retinopathy and Retina/Vitreous Surgery. He practices primarily in Brooklyn, NY, and is affiliated with NYU Langone Health – Tisch Hospital. Dr. Modi graduated from Yale School of Medicine in 2010, and completed his training at Bascom Palmer Eye Institute and Cleveland Clinic. He is board certified in Ophthalmology. 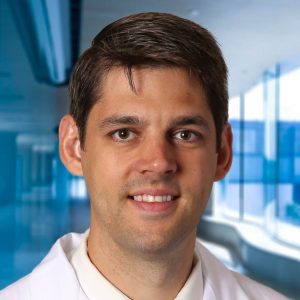 Matthew Ohr, MD is an Ophthalmology Specialist in Columbus, OH and has over 19 years of experience in the medical field. Dr. Ohr has extensive experience in Eye Conditions. He graduated from WRIGHT STATE UNIVERSITY / SCHOOL OF MEDICINE in 2004. 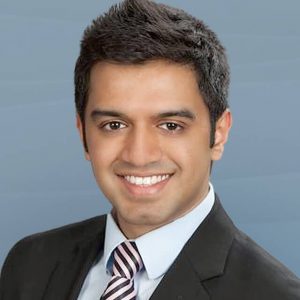 Dr. Sastry graduated from the combined BS-MD program at the University of Miami on a full academic scholarship. Following an internship in General Surgery at Huntington Hospital in Pasadena, CA, he completed his residency in Ophthalmology at the University of Southern California Roski Eye Institute in Los Angeles where he was selected to serve as Chief Resident in his final year. He then completed his fellowship in Vitreoretinal Surgery at the Duke Eye Center in Durham, NC.

Dr. Sumit Sharma is an ophthalmologist in Cleveland, Ohio and is affiliated with Cleveland Clinic. He received his medical degree from Case Western Reserve University School of Medicine and has been in practice between 11-20 years.

Dr. Steinle has received numerous accolades including the honor of being named Chief Resident and earning the prestigious Wirtschafter Award recognizing the finest resident teacher. During his fellowship, he was also named the best teacher at the Cleveland Clinic. Further accolades include a Senior ASRS Honors Award for his scientific contributions, as well as an International Best of ARVO Award for his research. He is also an elected member of the renowned Retina Society. He has published numerous book chapters and research articles. Dr. Steinle serves on several global steering committees and is a principal investigator in a number of research trials including novel therapies for AMD and diabetes. 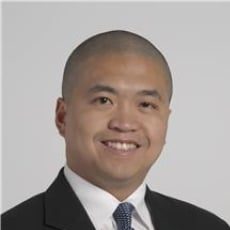 Alex Yuan, MD, PhD, is Assistant Professor of Ophthalmic Research at the Cleveland Clinic Lerner College of Medicine, and Physician Scientist at the Cole Eye Institute, Cleveland Clinic in Ohio. He earned his medical degree and doctoral degree in neurosciences from Washington University School of Medicine in St.

Can't make this event? Subscribe here to stay informed on all upcoming events!